The church leaflet describes the female figure as a monkey,
but John Harding's photos show clearly that the simian ears are in fact a coiffure or head-dress
indicating the sensuality and luxury of the woman who is being tempted or threatened
by the very Irish-Pictish theriomorph on the left.
I have been told that Norse (Viking) women had this (shall we call it the Brünnhilde ?) hair-style
which is not unknown in Germany today. .
This adds a pagan and pirate dimension to the concept and depiction of Luxuria and Vanitas
which may throw light on a famously enigmatic carving on the North Cross at Clonmacnois in Ireland
and on other damaged, squatting figures on slabs listed as Irish 'sheela-na-gigs'. 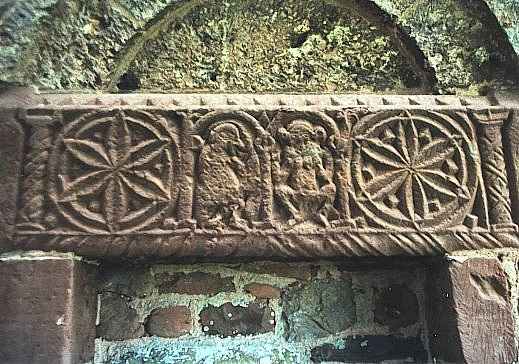 The sinning woman seems to be holding something to her mouth - probably not a mouth-organ -
so the carving, already fraught with significance, might also represent gluttony,
which is an accompanying theme on some Romanesque male exhibitionists.

Compare the above sculpture with scenes on Irish crosses.

click for more on the significance of hair and beards >