A NOTE ON GROTESQUES

It is only relatively recently in human history that people with bodily and facial disfigurements have disappeared from view.

First, they were kept off the streets, confined either to what amounted to house-arrest, or placed in prisons
known simply as 'institutions'.

Although exhibitionists are mostly grotesque in their bodies, not many have grotesque faces.
This became a feature of 'Gothic' sculpture - especially of gargoyles, bench-ends and misericords
- and may indeed have contributed to the coining of the very word 'Gothic'.

Recently, I came across, on a gay contact site, an example of a malformation or disfigurement
which would not look out of place on any mediæval church. 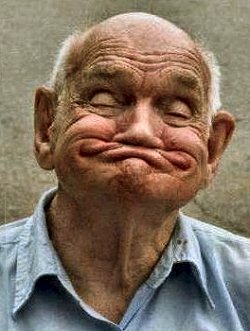 If this apparently-blind man did indeed post his own picture on that site, he deserves to be congratulated,
because nowadays, in the Anglophone world at least, mothers would abuse him for daring to walk abroad
and frightening their precious, hideously-overprotected children.