This 12th century font is quite different from those at Cleckheaton in Northern England and Vilach in Northern Spain,
and combines two different motifs common in Romanesque sculpture:
1. The upside-down figure signifying descent into Hell. (The photo below has been turned 180°)
2. The woman suckling beasts which was originally the personification of the bountiful Terra
(whose special creature was the serpent 'born of the earth')
but which turned into the hellish punishment of rich and lustful women
by forever suckling snakes and toads and, occasionally, tortoises.

Note the voluminous hair or head-dress of the female figure - a feature of most Luxuria carvings
and of many female exhibitionists. 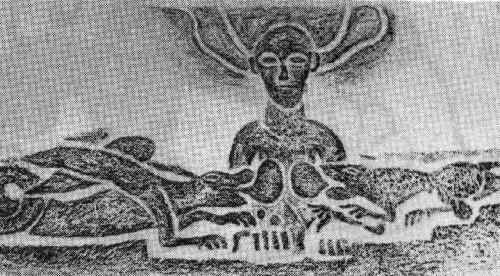 This figure has been interpreted by a Danish doctor as a figure giving birth - an interpretation
which also haunts speculation on sheela-na-gigs. But there is no real evidence of this beyond the splayed legs.
The upside-down position of the woman and the beasts (here shown 'right way up') is much more likely,
in a Romanesque context, to depict descent into Hell.

Not far away, on another font, in the church at Bråby, is a much more conventional treatment of the Luxuria theme,
carved 'the right way up'. 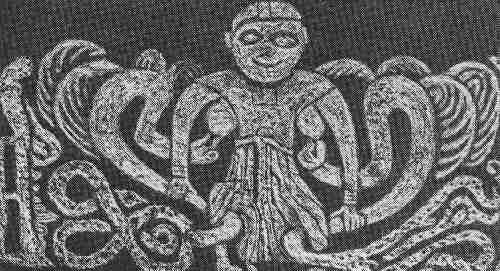 Compare both the above with the font at Winterborne Moncton in Wiltshire. 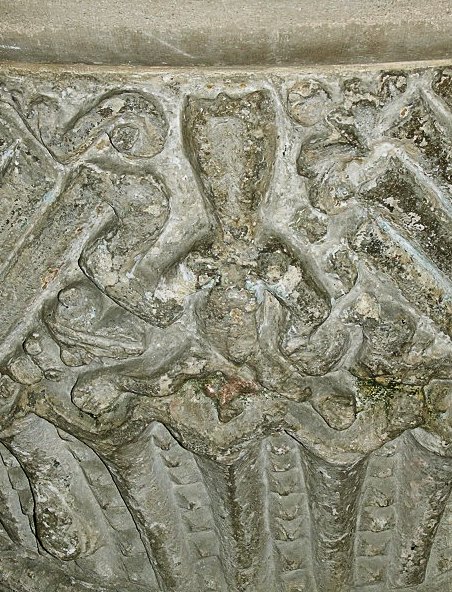 A tympanum at Gosmer in East Sjælland has truly got its iconography mixed up,
for it is a glorious depiction of Terra Mater suckling lions - except that they are horned
like the Beast in the Book of Revelations. Two ?hares (Romanesque symbols of lasciviousness)
or foxes, dogs or wolves (also highly symbolic) attack her hair,
which is crowned by a possibly feline head. This is the Whore of Babylon. 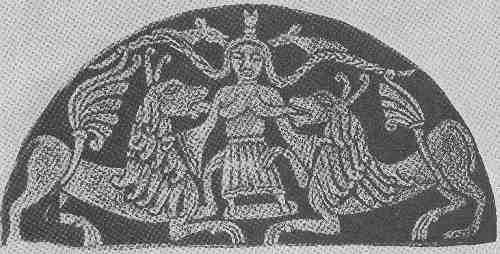 The font in the church at Lihme in Jutland goes on a different iconographical tack
showing the World Tree, Yggdrasill, nourishing (or being devoured by) two goats and a crow.
The goats, a rare motif in Romanesque sculpture, were in ancient times familiars and flankers of the earth mother,
and have always been symbols of fertility and lasciviousness.
The crow/raven is a symbol of death 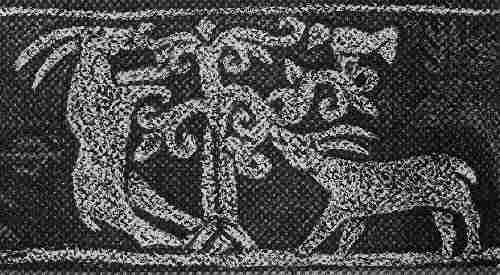 The ancient Iranian world tree was inhabited by the peacock, a symbol of immortality
also borrowed by Christians. The Jewish tree was, of course, the birdless tree of knowledge.
Christians depicted the ancient earth-spirit, the tempter, the serpent
winding around or in it.

This series of pictures shows how fluid motifs and meanings can be in Romanesque iconography.

They are by Søren Nancke-Kroghe, and are taken from
ICO Den iconographiske Post, number 3 (1974).