A transept capital at Passirac (Charente) depicts a man afflicted by concupiscence and being warned by heavenly hornblowers,
like those at Brioude. 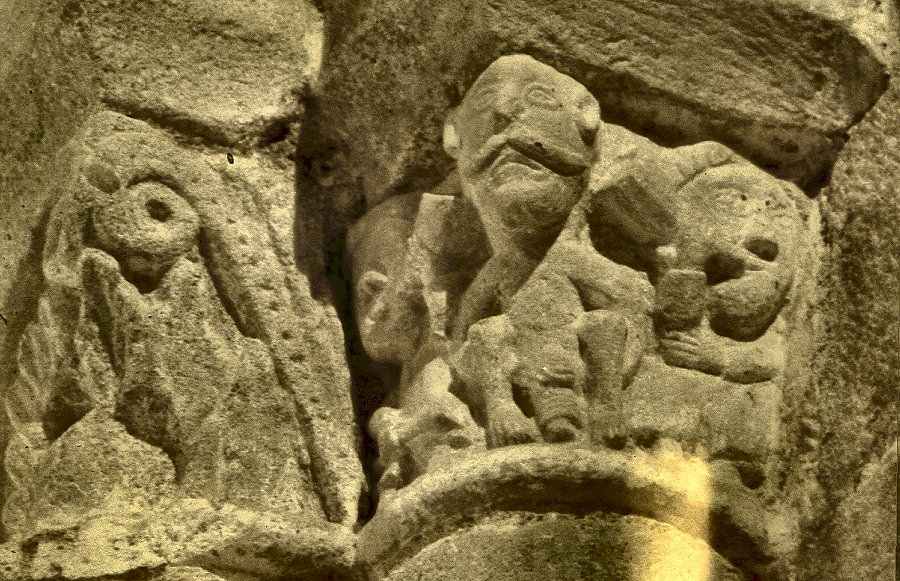 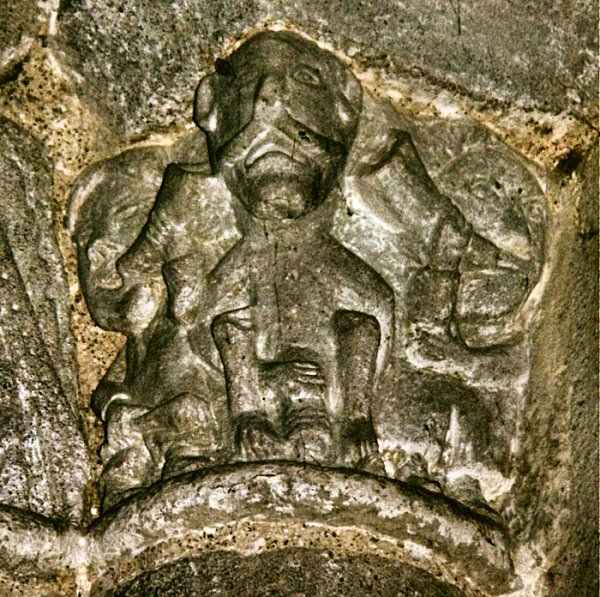 Compare with this group of entertainers from San Martín de Mondoñedo (Lugo). 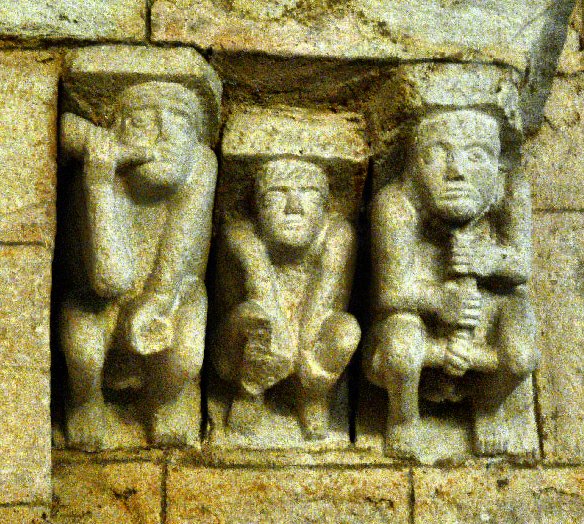 Two corbels at Moulins-sur-Yèvre (Cher)
where one figure sounds the Last Trump in the direction of a sinner being devoured by the jaws of Hell... 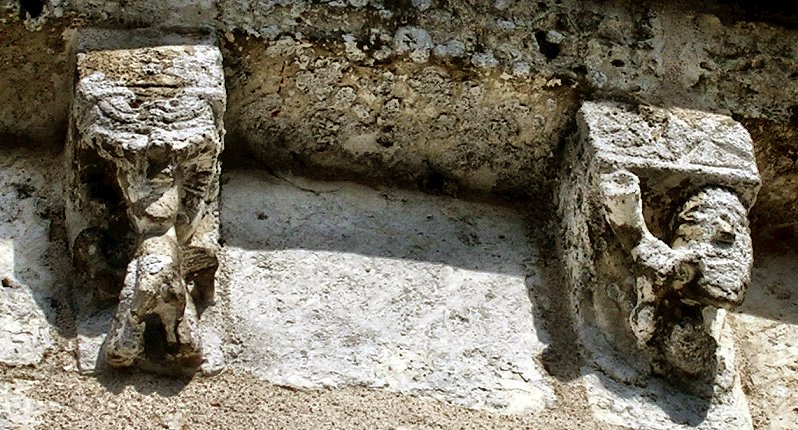 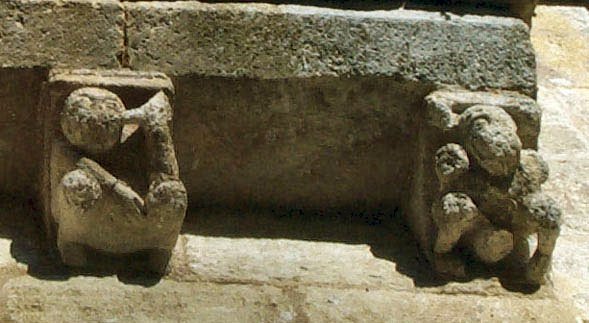 ..and at Bourbon-l'Archambault (Allier) two hornblowers mounted on rams
direct their blasts towards a devilish figure with raised skirts. 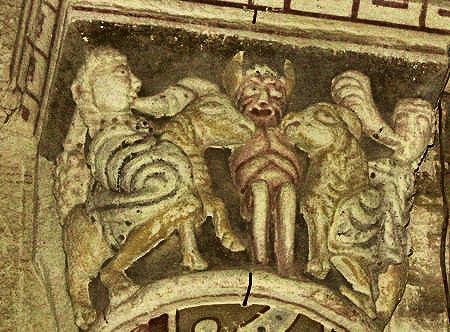 Other capitals in the same church feature heavenly musicians, including another (bearded) hornblower
who simultaneously plays the harp while seated on a stool. 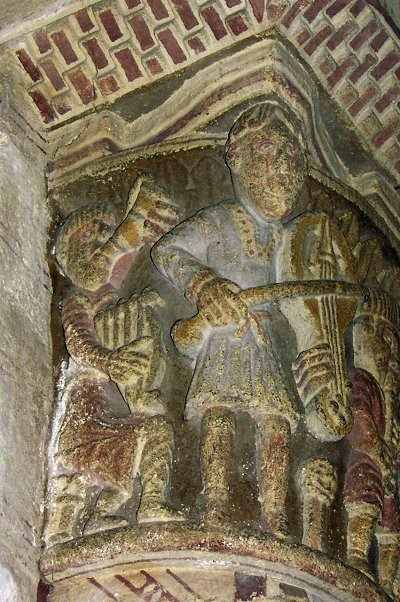 At Saint-Révérien (Nièvre), the dead arise from sarcophagi as two angels sound the Last Trump. 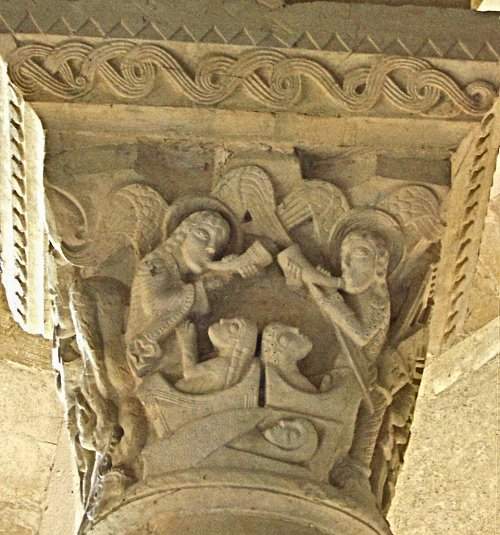 But at Oyré (Vienne), the trumpeter simultaneously pulls the long beard of a sinner. 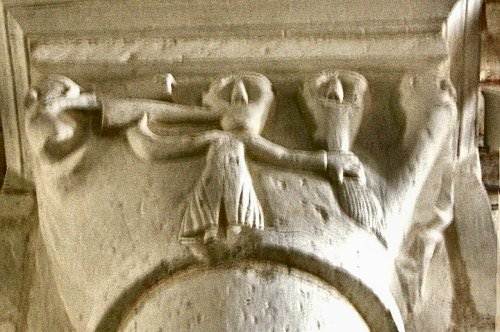 Compare again with the group at San Martín de Mondoñedo. 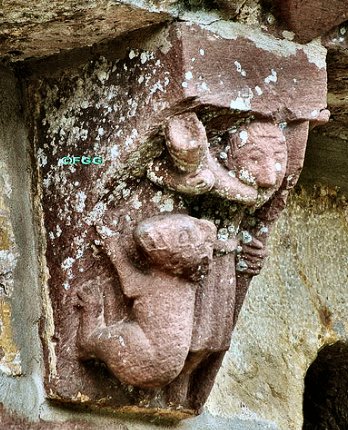 Santiago de Compostela, Puerta de las Platerías:
Adam and Eve with the Trumpeter of Doom beneath. 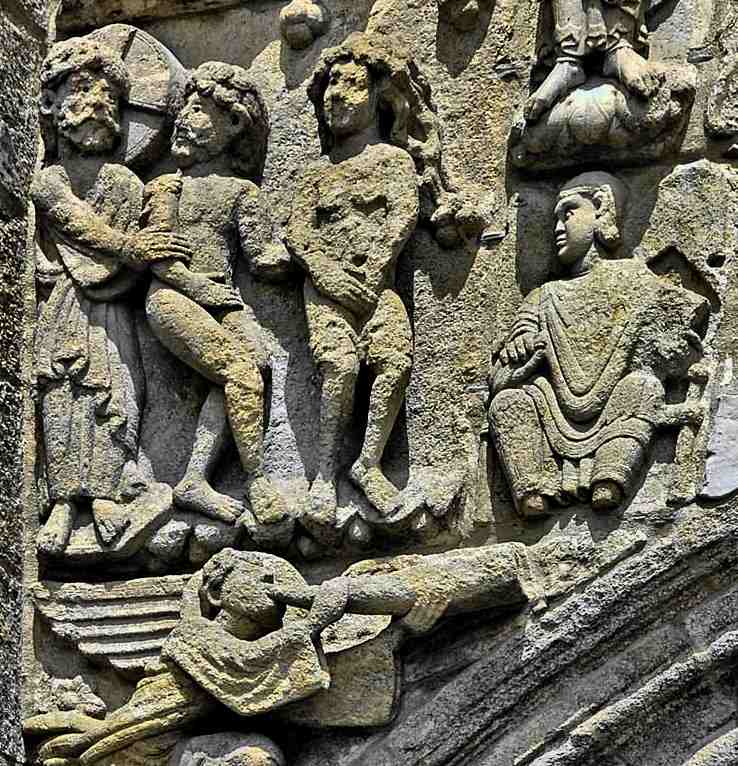 A remarkable transept-capital in the Cantabrian church at Villanueva de la Nía might be a lampoon
like the famous self-fellating bishop on Cologne Cathedral.
shows an important personage flanked by two exhibitionists - one almost identical to the female on an outside window at nearby Cervatos,
the other a broken ithyphallic male blowing a trumpet into the ear of the personage,
who stands with palms outstretched and wears a tiara of something resembling hares' ears
(the hare was a symbol of concupiscence)
or possibly feathers as worn by (concupiscent) jongleurs/joglars - or a King of Fools. 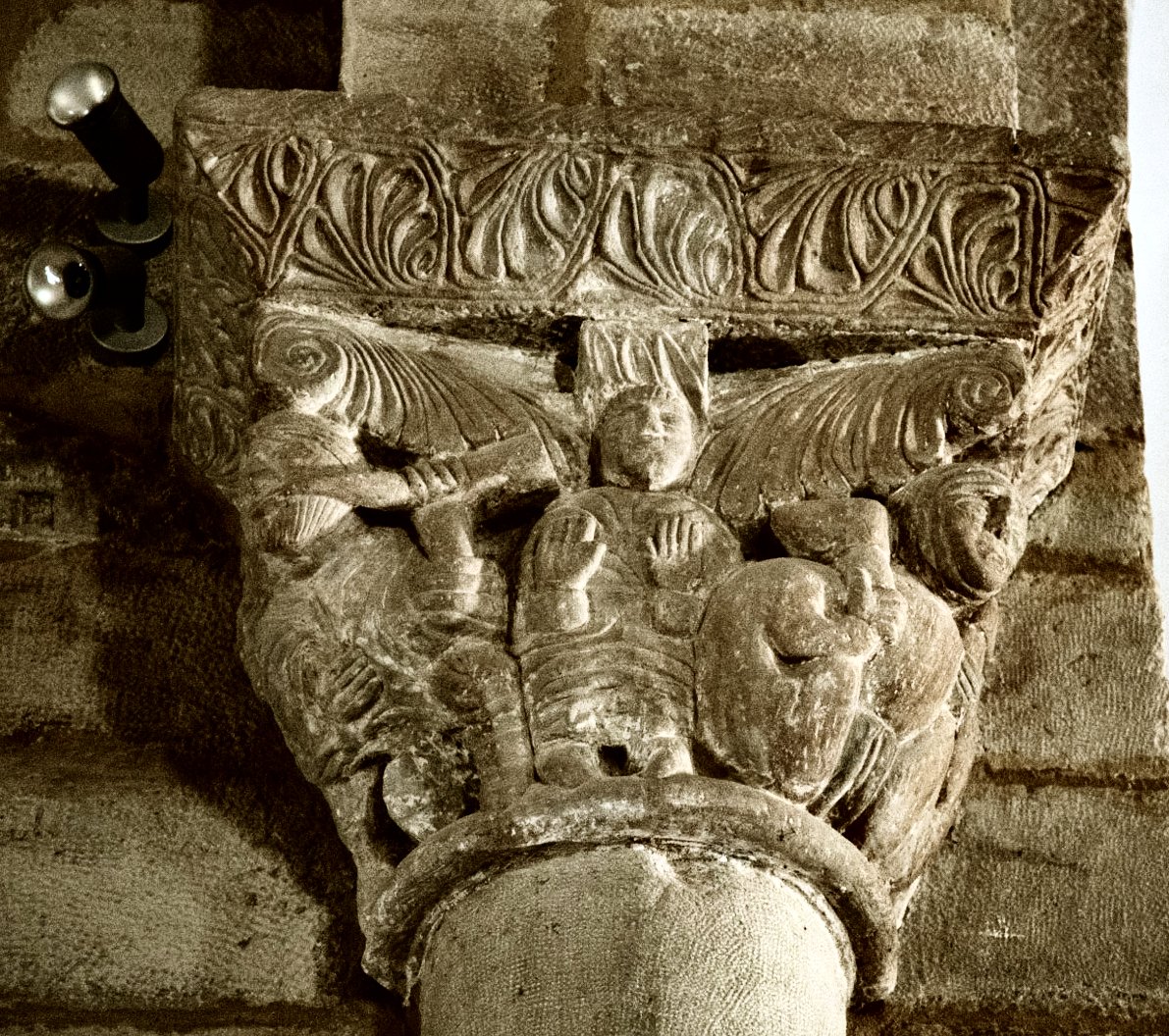 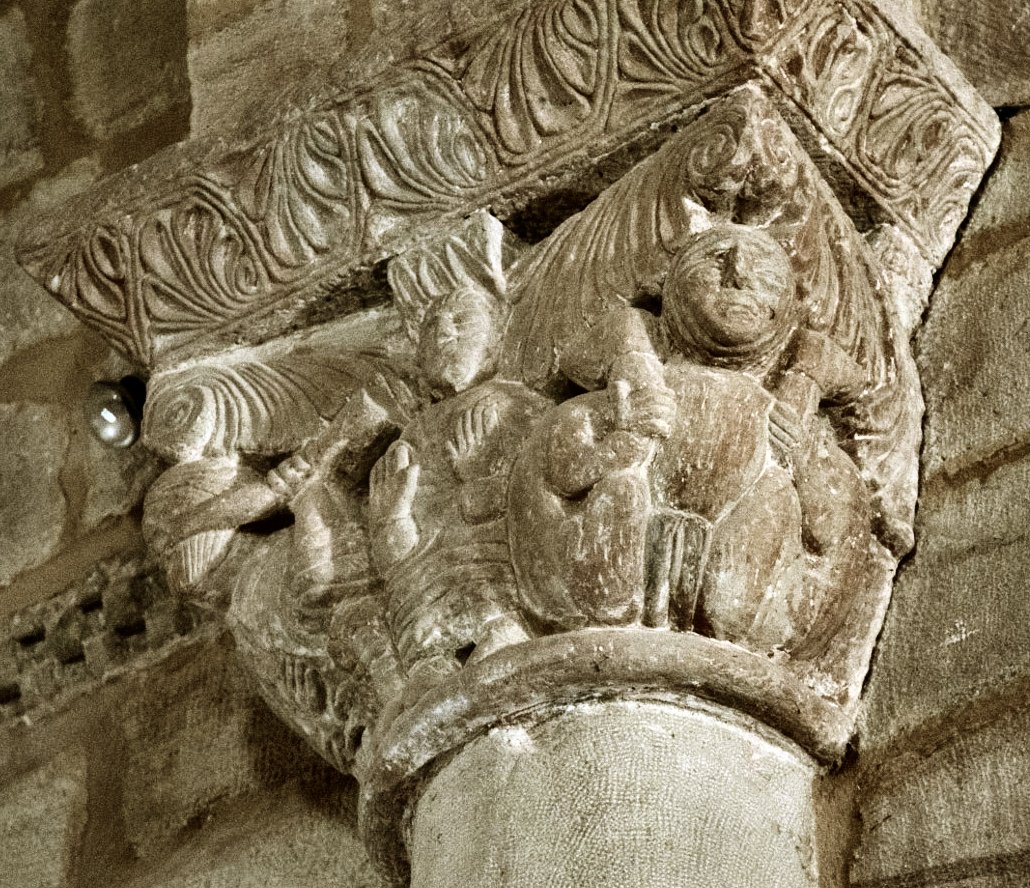 photos by courtesy of Mark Gredler 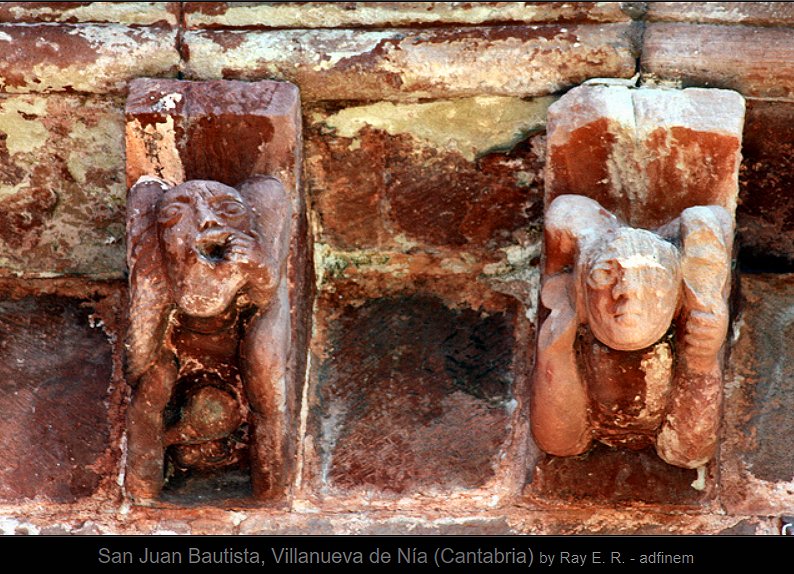 It should be remembered, however, that some early and Roman horn-blowers represent winds,
as on the marvellous floor-mosaic in the chapel of St-Nicolas, Die (Drôme), 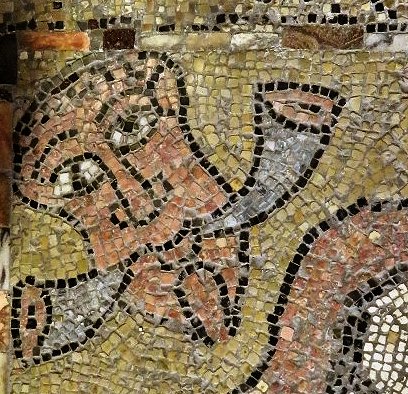 where similar heads/masks spout the rivers of Paradise in familiar Romanesque style.

and on the wonderful 12th century Creation Tapestry at Girona in Catalonia,
here showing the South Wind astride an enormous bellows. 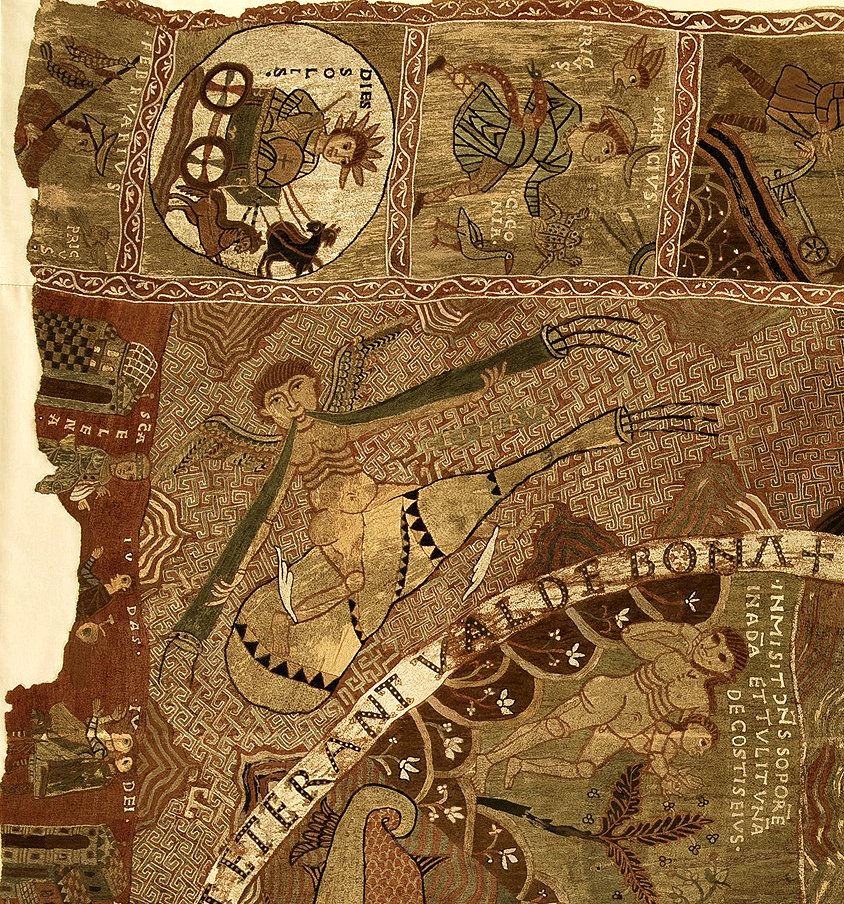 bottom right: Eve emerging out of Adam, as Athene did from the head of Zeus.

But the roughly-contemporaneous Beatus manuscript from the Escorial
shows the altogether less cheerful Second Trumpet of the Angel of the Apocalypse,
causing the fiery mountain to fall into the sea. 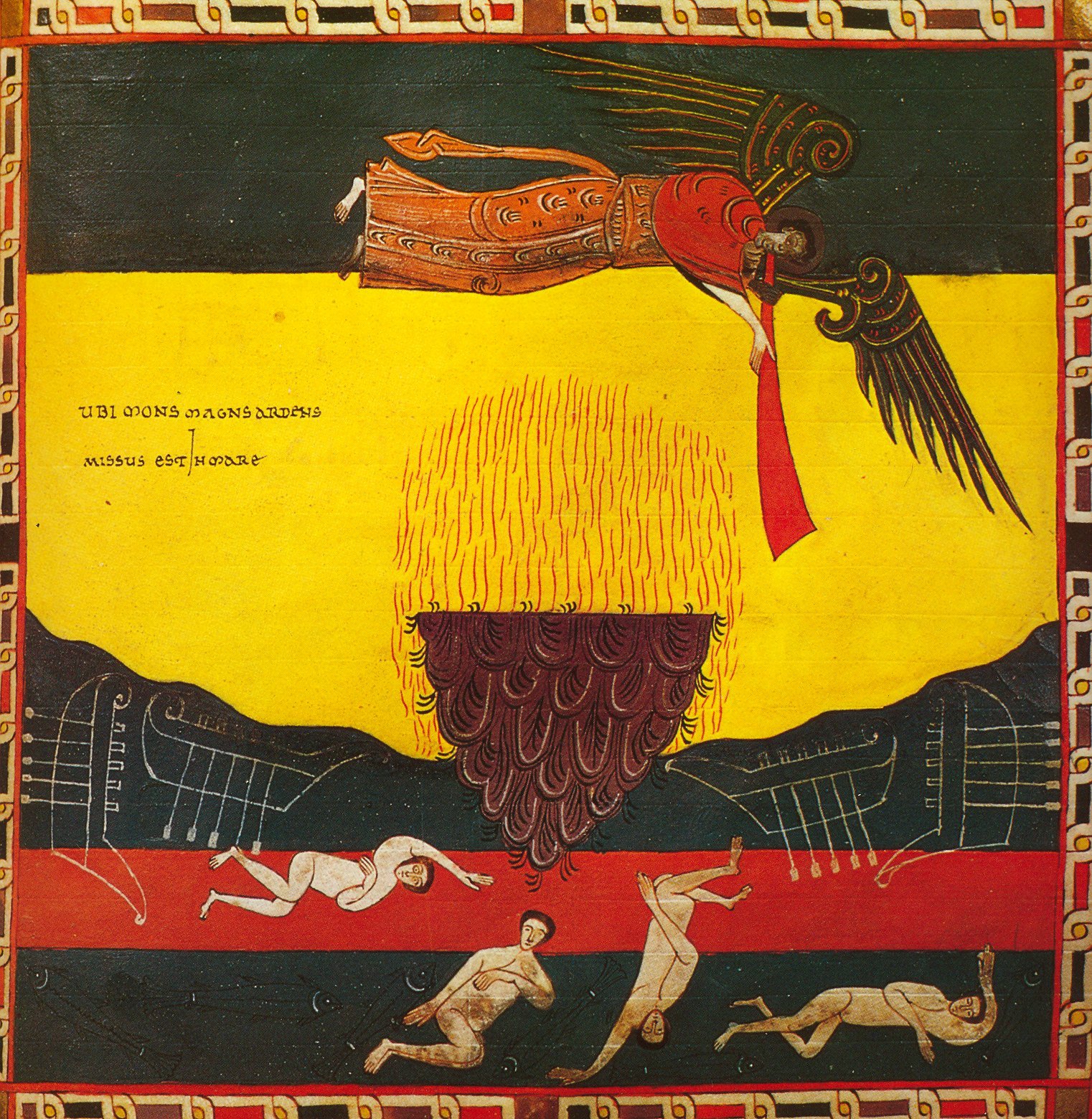 Chrism with lovely and significant decoration - including a horn-blower -
above the doorway at Coll de Nargo (Lleida). 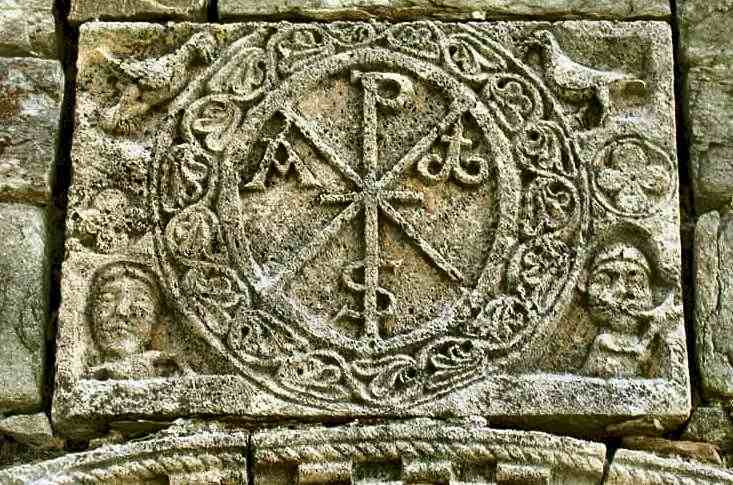 This chap at Champagnolles (Charente-Maritime) might represent a wind. 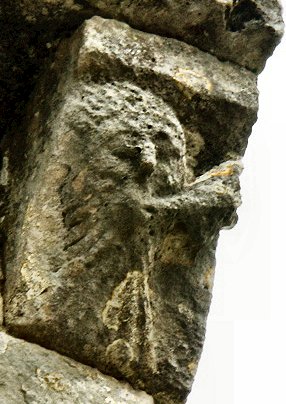 Capital from the cathedral of Saint-Etienne in Toulouse:
a jongleresse with bells hanging from her tresses, and two horns originally attached to her jaws! 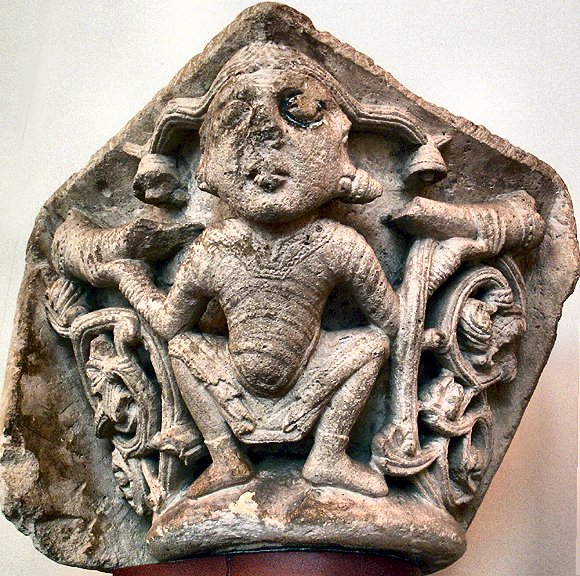 This remarkable carving is on a 15th century Hindu temple at Candi Sukuh on the island of Java, Indonesia.
The only purely Hindu element on it is the hair.
How did the Romanesque squatting exhibitionist (sometimes with the horn motif added)
reach the East Indies ? 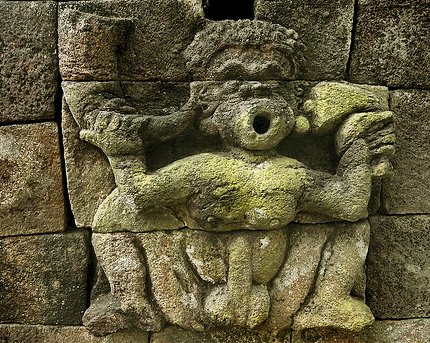